Our online shop is open around the clock as usual, but you may experience slightly longer processing and delivery times due to disruptions in postal services. We have now also extended our return policy to 30 days.

A birth story from 1919, jotted down by a proud new father

What was it like to become a dad almost 100 years ago? Read Hilding’s fantastic birth story about the day his first-born son, Björn, came into the world. The author’s great grandson, Robin, came upon this written account when he became a father himself for the first time this year.

Birth story: How I gave birth in the car

I shall apply pen to paper in an effort to find the words that capture the arrival of our first-born. The weather was wonderfully beautiful with a clear-blue sky, and we found ourselves in the midst of an Indian summer. Already on the eve of this momentous day, Elsa was experiencing short pains in her lower abdomen, and we jested that it was not long before “our boy” would arrive. For it seemed to us to be the natural conclusion that it would be a boy. Sometimes when we spoke about what was to come, we were unsure as to whether to refer to the child in the feminine or masculine, but in the end we somehow always slipped into saying “he”. The pains continued to be rather mild, so we did not believe that anything serious was underway.

Unsure as to whether to refer to the child in the feminine or masculine.

The following morning (September 15), as the clock struck ten, the pains returned with greater intensity, although never worse than that Elsa had the strength to go to the store, where she purchased lingonberries that she even cooked that morning. As we lunched at noon, she made the comment in passing that she was suffering. By one o’clock mid-day the discomfort was growing. I then called upon my sister, Elna, and asked for her advice, raising the thought that perhaps she should come now. She said she would come immediately, which she did.

Once she arrived and observed Elsa, she told me it would all be over soon. I was not quick to believe her, that it would all pass so quickly. I went down to the factory around two o’clock mid-day, after carrying down the bed from the attic and all the bedclothes.

At 4:20 Elna called to offer her congratulations.

– What are you saying? Tell me it is true, such things shall not be taken lightly!

But it was true, and when I immediately thereafter returned home, there lay Elsa, content, with a smile on her face and the boy beside her. Björn had been born at 4:10, and he weighed 5 lbs, 14 oz.

Not exactly a handsome face.

He did not exactly have a handsome face, but both Elna and Mrs. Axelsson swore up and down that he was cuter than what babies normally are. The birth itself had progressed with unusual speed. However, the normal pains had been present. Elsa did not speak much of them herself, but from what I could gather, they had been tolerable. Now, at midnight, I am sitting here watching over my small wife and big son.

My son, Björn Åke Hilding, was baptized on October 18, 1919, on the third anniversary of our wedding.

Important tips! How all dads can become involved in the birth and nursing

Have your birth story published in This is Life!

We are curious about your story. Email your birth story (max 500 words) and at least one picture to magazine@babybjorn.com.

We reserve the right to edit your text if we choose to publish it. No remuneration is offered. 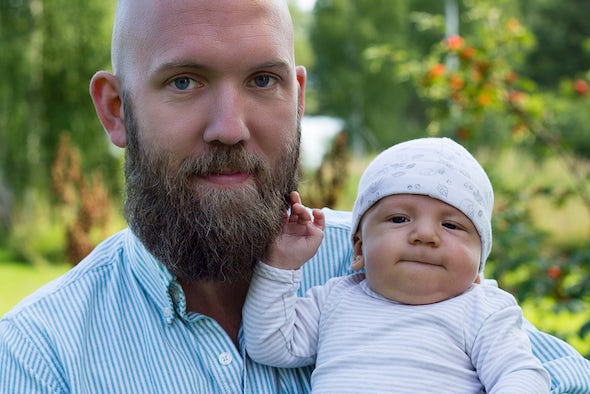 About Hilding and his family:

Hilding was the founder and director of a factory that made toothpaste, baking powder, adhesives and fruit salts. Elsa did not work while the children were young, but in later years she also worked in the factory. Their family also included little brother Ulf as well as Elsa’s younger sister, Solveig, who grew up as a sibling to Björn and Ulf.

About becoming a dad then and now:

I recently became a dad myself, and it makes Hilding’s story even more interesting for me. In 1919, the dad was not expected to be there during the birth, and I feel a little bit sorry for all of the men who have missed out on this. The birth was a very powerful experience, both frightening and fantastic at the same time, and it has given me new respect and admiration for my beloved Petra – and all other women who have given birth – that I would not have wanted to be without. Hilding simply had to settle for helping arrange the practical details around the birth, and I read into his notes that he also found this a little sad. He is so obviously proud of his “small wife and big son” when the birth is over.

By Ida K. Write to us magazine@babybjorn.com