Free UPS Ground Shipping on all U.S. orders over $35.

Birth story: How I gave birth in the car

“Feeling a head between your legs while you’re still wearing your pants and underwear – now that’s something to make you panic!” Tina gave birth to her baby in the car on the way to hospital. Here’s her story about how she gave birth in the car.

How I gave birth in the car

We already had a daughter of two-and-a-half and were expecting our second child. I was feeling really great – both my pregnancies went really well.

But our first daughter was born three weeks early. The whole thing took just five hours after my water broke, so I was pretty nervous about giving birth the second time.

Could that have been the mucus plug?

The baby was due on July 17. On July 10, we had an appointment at the clinic of obstetrics and gynecology in Malmö, which was just over 12 miles away. It was all peace and quiet in my tummy; everything looked fine and I was barely dilated so all we could do was wait. On July 12, I woke up to stomach cramps and found mucus and blood in the toilet. Could that have been the mucus plug?

I phoned the clinic and told them what happened the first time I gave birth. They told me to time the contractions and come in when they were five or six minutes apart. So I did, but because they were only 10 or 11 minutes apart my daughter and I lay down to take a nap.

The baby’s on the way

Suddenly, something woke me up. I phoned my partner, crying. “It really hurts,” I said, “You have to come home, the baby’s on the way.”

It took my partner 15 minutes to get home. I could barely stand by the time he walked through the door. “We’ll never make it,” I said.

We’d just merged onto the highway when I screamed at my partner that the head was coming.

Giving birth on the highway

I dialed 911. “I’m giving birth, and we won’t make it to the hospital in time!” We were in the car on our way to hospital.

The 911 call handler asked me whether my water had broken. And, at that precise moment, whoosh! That’s exactly what happened. As soon as my water broke, I felt the first proper contraction.

We’d just merged onto the highway when I screamed at my partner that the head was coming. He had to stop! With the next contraction, the head was out.

Feeling a head between your legs while you’re still wearing your pants and underwear and sitting in a cramped car with a huge car seat behind you – now that’s something to make you panic! I wasn’t at all worried about the fact I was about to give birth. All I could think about was how the f#&k am I supposed to get my pants off?

But my pants came off and I held onto our baby’s head. After my partner pulled off and was coming around to my side of the car, I felt the next contraction and the baby was born. He caught the baby and placed her on my tummy.

About two minutes had passed between my water breaking and the baby lying on my tummy. The feeling of being half-in, half-out of a car on the highway with your baby on your tummy – well, it’s completely impossible to describe. But I felt overjoyed, relief, happiness.

The ambulance came and took us to hospital. When we got there, they told us we had a little girl. She was 19 inches long and weighed 7 lbs 14 oz. She was absolutely perfect. She couldn’t have been any more perfect.

A lot of people ask us how we felt and whether it all came as a total shock, but that’s certainly not our view of the whole event. From our perspective, it was great. Everything went smoothly, and both the baby and I were unharmed. Mother Nature is usually capable of sorting these things out. We’re incredibly pleased and proud to have our daughter, who gave us something we’ll remember for the rest of our lives.

10 reasons to miss the bump

Get your birth story published in This is Life!

We’d love to hear your story. Email your birth story (max. 500 words) and at least one photo to magazine@babybjorn.com

We reserve the right to edit your text if we decide to publish it. Please note, no remuneration is offered. 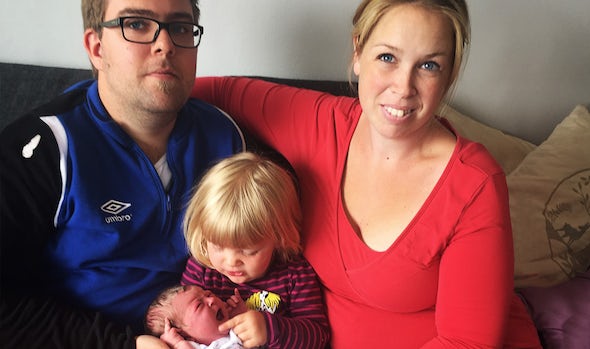 My partner and I have two daughters, a 3-year-old and a 9-month-old, and a dog, Chico. We live in Svedala, just outside Malmö, in the house we bought when our first daughter was 5 months old.

Thoughts about giving birth in the car:
“We often talk about how our little Moa made her entrance into the world. We remember it all very fondly and it gives us a good laugh, but at the same time we can’t help but think ‘what if…?’. Everything went well, though, and I’m so incredibly proud of my beautiful children and fantastic partner.”

By Anna K. Write to us magazine@babybjorn.com

Good reads about being pregnant

The 3D model may contain minor deviations and thus differ from the actual product.

Sign up for our newsletter to get info about new products and promotions, as well as inspiring reading for parents-to-be and new parents.

Thank you for registering!